**Free Shipping Within the Continental USA On Orders Over $50
Returning Customer? Share your feedback for a Chance to Win Lubricity Today! Click Here
Skip to content

WHAT IS METALLIC TASTE?

Read our most comprehensive guide to the condition of metallic taste (dysgeusia), its causes and remedies. 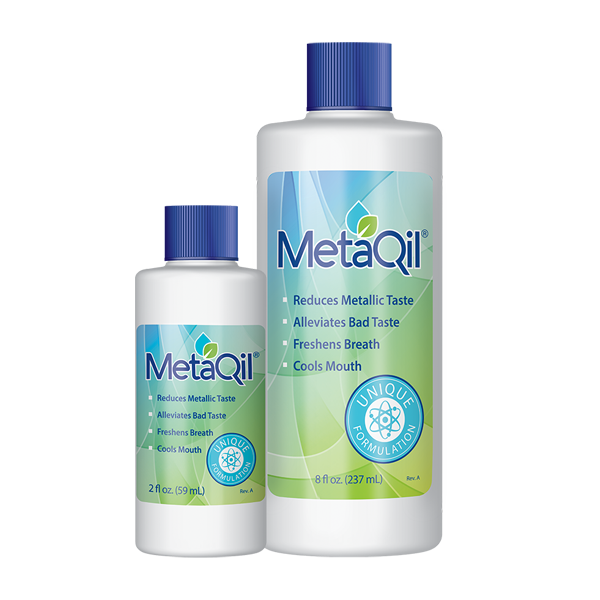 Metallic taste is a taste disorder medically known as dysgeusia. It is an abnormal or impaired sense of taste, or an unpleasant alteration of taste sensation. It is usually described as persistent metallic, sour, bitter or other unusual or bad taste in the mouth.

It is common to experience temporary unpleasant taste in the mouth. It often happens after eating some pungent foods like onions, garlic or certain fish. This temporary experience doesn’t mean you have metallic taste. However, a persistent sensation of sour, bitter or metal taste in the mouth may be a sign of a taste disorder.

The flavors of foods usually don’t affect metallic taste. In fact, it can produce an opposite effect, making even your favorite meals taste unpleasant.

Some of the common causes of metallic taste include:

[+] GERD
Gastroesophageal Reflux Disease (GERD) is a chronic medical condition that is characterized by stomach acid or bile flowing up into the food pipe and causing irritation and discomfort. It is very common that GERD causes metallic, acidic, sour or bitter taste in the mouth.  There are two main factors that cause taste alterations. One is acid reflux itself; the second is the medications taken to remedy the disease.

Chemotherapy and radiotherapy may cause taste and smell disturbances by destroying taste and olfactory receptor cells. In a study among cancer patients, 29 of 37 (78%) participants described their perceived taste change as metallic. The change was reported after at least two cycles of various chemotherapy treatments . It is especially common in patients who get the radiation on the neck and head areas.

The cells in normal taste buds regenerate every 10 days. When radiation therapy kills those cells, they take time to grow again. During this time patients experience taste alterations.

[+] Infections and Allergies
Common colds, respiratory and middle ear infections can impact the sense of taste, and the sense of smell. Allergies that affect the respiratory system can cause metallic taste too. Loss of taste can be a result of either physical blockage or neurological damage in the nasal canal.

[+] Chemical exposures
Environmental toxins can cause severe disruptions in taste and smell. They can enter the system through the bloodstream or inhaled air.

Exposure to arsenic, benzene, carbon disulfide, cadmium, sulfur dioxide, chlorine, chromium fumes, and cigarette smoke can produce smell or taste disturbances. Lead poisoning can cause metallic taste. Workers exposed to zinc and copper fumes have complained of it as well.

[+] Central Nervous System (CNS) disorders
Nervous system is responsible for communicating the taste signals to the brain. If something is not working as it should within this complex system, sense of taste can be affected in different ways. Some CNS-related diseases, such as dementia, Alzheimer’s and Parkinson’s, often cause metallic taste.

Metallic taste begins almost immediately after a person with an allergy is exposed to the allergy trigger. The taste change is soon followed by other symptoms. They may include itching of the mouth, face, hands or feet, sweating, headache, or disorientation.

[+] Surgery
Surgery involving the middle ear can sometimes cause stretching or sectioning of the nerve, causing taste loss. Operations on the brain can occasionally cause taste alterations. General anesthesia itself can affect the sense of taste.

[+] Poor oral hygiene
Poor oral hygiene can cause the growth of bacteria in the mouth. Bacteria itself often causes bad breath. The resulting infections and diseases may alter  taste and breath. They also pose a much more serious risk to overall health.

Usually, metallic taste goes away once the underlying cause is resolved. If the cause is resolved but the sensation is still present, it can mean a more serious health condition. In this case, it is important to see a doctor right away.

The main problem with metallic taste is that it can cause poor nutrition. People with metallic taste often have aversions to certain foods. This is because the disorder makes foods taste different or unpleasant. As a result, people may eat less overall or make poor food choices.

To mask the unpleasant taste, dysgeusia patients often choose to eat saltier and overly sweet foods. Intake of sodium and sugar increases as a result, and can cause complications and negative impact on overall health. One study showed that some patients may also start drinking water more. This creates a risk of polyuria, incontinence and higher risk of falls in the elderly.

Usually, the treatment focuses on resolving the underlying cause. However, it may be difficult to change a patient’s routine. Some causes of taste changes are hard to remove. For example, some medications, like those for blood pressure, are not easy to switch without risk for other health problems.

In many cases, metallic taste may take a long time to go away. In this situation, it is possible to reduce the symptoms. There are things you can do to help alleviate the unpleasant taste. We have written a special article about this, and you can read it here.

We understand the discomfort that persistent taste changes cause. That’s why we developed MetaQil®, a product to relieve bad tastes in the mouth. MetaQil is a simple mouth rinse that provides comfort without interfering with necessary medications and healthy diet.

We work with doctors around the country to help their patients maintain a healthy lifestyle. Ask your doctor or dentist if they have free samples for you to try.